If there is one plant you should avoid at the nursery, it is Ligustrum (also known as Privet), an ornamental shrub. If you already have it growing in your yard, you may want to consider taking it out.

Why? Because Ligustrum is a highly invasive non-native plant that is taking over wooded areas throughout the Eastern United States, crowding out native species and drastically reducing biodiversity in those areas.

Ligustrum is one of the most problematic invasive species we are dealing with today in the U.S. (just ask my Master Naturalist friends who have spent endless volunteer hours trying to remove it!).

However, it is still being readily sold at nurseries throughout the country with other invasive species like nandina. Let’s work together to stop this!

Ligustrum (Privet) is a semi-evergreen shrub / small tree with dark green leaves that can reach up to 50 feet high. It grows in full sun to partial shade and forms dense thickets, making it a popular landscaping shrub for hedges. Like other invasive plants, it grows in all soil types.

Large clusters of white flowers cover ligustrum in late spring and early summer (between April and June). They are followed by dark purple to black fruit clusters (called drupes) from late fall through the winter. This is when the plants are most easily identifiable.

The fruit is also what makes this plant so problematic. Birds easily disperse the fruit seeds to areas outside of where it was planted.

It didn’t take long before I heard about its negative impact on natural areas only to discover I had some growing in my own yard. Here are reasons why it is so bad:

Ligustrum trees are easy to identify in the winter because they are teeming with clusters of black fruit.

While birds like Cedar Waxwings do eat the fruit, it is not worth the problems created by them dispersing the seeds.

Privet is an understory shrub (although some can get up to 50 ft. tall). Once established in a wooded area, it crowds out most of the native plants in the understory and quickly changes the ecology of the area.

3. When privet takes over, pollinators disappear

You won’t see many pollinators in ligustrum filled forests. A study by the US Forest Service showed the wildlife impact of removing ligustrum.

Two years after removing ligustrum from a forested area, they recorded 4-5 times more bee species, and 3 times as many butterfly species as areas still filled with ligustrum.

The good news: removing the ligustrum brings back the pollinators!

4. Once it spreads, it is hard to eradicate

Removing ligustrum that has spread through a large area requires diligence and ongoing monitoring for regrowth after the plants are removed.

Read on to see how the Headwaters Sanctuary, a local San Antonio nature preserve, is engaging in a multi-year effort to rid its 53 acres of ligustrum.

5. The less we buy it, the less nurseries will carry it

This is important. The more we become informed as consumers, the sooner garden centers will stop selling these plants. Please ask your local nursery to not carry ligustrum (send them this article!).

I have seen firsthand the amount of work it takes to remove ligustrum that has invaded forested areas. Here in San Antonio, the 53 acre Headwaters Sanctuary is the largest nature preserve in the middle of the city. However it is flooded with ligustrum.

No one has ever deliberately planted privet at the Headwaters Sanctuary, yet its 53 acre wooded area is full of it. “For decades, homeowners in the surrounding neighborhoods have purchased Ligustrum as a hardy, evergreen hedge. We are inundated as a result.”, says Ball.

According to Ball, “Some zones are packed so heavily with ligustrum you can’t see the sky or hear birds. An ecologist told me she’s only ever seen one bird’s nest come out of ligustrum. You don’t hear birdsong in these parts of the sanctuary.”

The Headwaters created a multi-year plan to tackle infestation

Starting in the fall of 2019, the Headwaters started to do something about it in a big way. Ball divided the Sanctuary into 18 zones to help tackle privet removal and keep track of progress within each zone. So far, two zones are almost complete.

Each week a team of up to 20 volunteers from the community and local universities meets to cut down ligustrum, treat the stumps with herbicide, and put the branches through a wood chipper.

Teams of volunteers have removed 18,000 plants to date

Despite setbacks due to the pandemic and other hurdles, volunteers have steadily worked on two of the zones, removing upwards of 18,000 plants (80% of them ligustrum in various sizes).

“Some of the ligustrum plants we removed have multi-limbed trunks that can be two to three stories tall“, says Ball.

There is still a long way to go. Ball hopes to continue moving through all 18 zones, with a targeted completion date in 2025.

There are already signs of restoration of natives and wildlife

“We have seen more bird activity as well. However, there is not a lot of understory yet because of the shade the ligustrum produced”, says Ball.

You can help the Headwaters initiative!

If you live in San Antonio, the Headwaters Sanctuary can always use more volunteers to help on Wednesdays and Saturdays with ligustrum removal. Email Pamela Ball at [email protected] for more information.

How to Remove a Ligustrum Tree

If you have privet growing in your property, here are the steps you can take to remove it:

The best thing you can do is get to the ligustrum seedlings before they grow larger. Dig them out, removing all the roots.

2. If the plant is large, cut it down to the ground

Larger plants may require a chainsaw to cut down.

Removing privet typically requires a herbicide application. The Headwaters uses a heavy duty herbicide called Pathfinder 2 to spray the trunk and root collar. They combine the herbicide with dye so they can see it when spraying it.

Even with the herbicide there will be regrowth. Monitor every few months and hand prune and apply more herbicide as needed.

Types of Privet to Avoid

There are several different types of ligustrum species sold at nurseries, which should be avoided. These were all introduced to North America from other continents. All of them look fairly similar to each other but have different common names.

According to the USDA, Chinese Privet (l. sinense) is one of the worst invasive species in the South. It thrives in the warm climate of the Southeast, and has completely taken over many of the wooded areas in that region.

Chinese Privet was introduced in the US from Asia in the 1800s and escaped cultivation by the 1930s, continuing to spread over the past nearly 100 years. According to Wildlife.org, it is the primary cause of biodiversity loss along streams in the Southeast.

Native to Europe and Northern Africa, this species of privet (l. vulgare), also known as “Common Privet” is taking over forests of the Northeastern United States. It is listed in the Global Invasive Species Database.

L. japonicum looks similar to Chinese Privet, but with larger and thicker leaves. It also goes by the name “Wax Leaf Ligustrum” and is listed as a Federal and Texas Department of Agriculture noxious weed.

Glossy privet (l. lucidum) can grow up to 50 feet tall. It is considered invasive in states including California, Florida and North Carolina.

Are All Ligustrum Plants Bad?

The quick answer is, yes, most of them are! All of the privet species listed above are invasive in certain areas of the U.S. There is a sterile variety of ligustrum called Sunshine Ligustrum that do not produce fruit, and therefore can’t spread by seed. By why plant it when there are more beneficial native plants out there?

Pin this to help spread the word!

Have nandina in your yard? Then be sure to read this:

I’m Haeley Giambalvo, the founder of Native Backyards and the author of this post! I really appreciate you stopping by, and I hope you found the information you needed. Feel free to reach out to me at any time with questions via email or on Instagram @NativeBackyards.

Together, we can help the Earth from our own yards by growing more native plants that support pollinators, birds and wildlife! 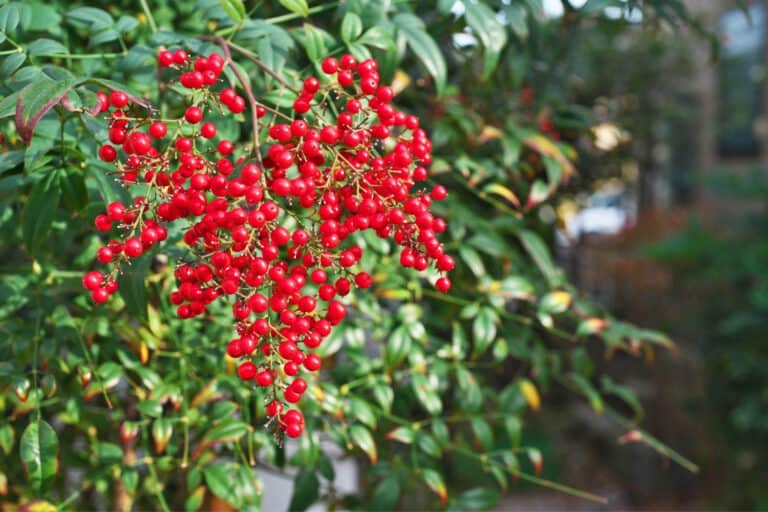 Do you have nandina growing in your yard? If you live in the Southern US, there is a good chance you do! However, here are 5 reasons why you may want to consider replacing this plant with something else.