If you walk around my neighborhood in San Antonio, TX, you’ll see Nandina Domestica in almost every yard. It must have been on sale at the nursery when our homes built!

We had recently removed a number of nandina shrubs after learning more about them.

If you need to remove nandina from your yard, don’t miss my list of Top Gardening Tools Used by the Pros. These are the hard working tools that Master Naturalists use when removing invasive plants like nandina!

Nandina is a tall leafy shrub that can grow 6-8 feet tall. Each shrub is made up of numerous narrow stems that resemble bamboo, and give it some of its common names of “Heavenly Bamboo” and “Sacred Bamboo” even though it is not actually bamboo.

Its leaves are evergreen in the winter, which has made it such a popular landscape plant. The green leaves tend to have a touch of red in the winter as well.

Nandina also produces red berries throughout the winter. Apparently if you have a group of plants growing together they are more likely to produce berries than a single plant.

Where Will You Find It in the US?

Even today, nandina is readily available at nurseries throughout the southern US, despite being designated as an invasive species.

According to the USDA Forest Service, you can find nandina growing in forested areas in the following states:

Where is Nandina Native to?

Nandina was brought to the US from Asia in the early 1800s. It is native to China, Japan and India.

Like many plants imported from other parts of the world, it was brought to the US for its ornamental qualities such as its berries and evergreen leaves.

Get the Garden Tools the Pros Use!

I want to hook you up with the only six garden tools you’ll ever need. These unique tools were introduced to me by fellow Master Naturalists who spend hours weeding, transplanting, and removing invasive plants like nandina.

Grab my list today by signing up here. You’ll never use your old shovel again!

5 Reasons You Don’t Want Nandina in Your Yard

I had nandina in our yard for 7 years and enjoyed the look of it without knowing anything about it! So don’t stress if you have it in your yard.

However, if you are considering buying nandina for the first time, these reasons may encourage you to opt for something else!

1. Nandina is considered an invasive species in the United States

An invasive plant is one that has escaped from cultivation (such as your landscaping or garden), and has started growing where it wasn’t meant to grow.

Nandina can be found growing in forested areas throughout the southern United States. Birds and other animals can disperse the berries causing it to grow in the wild.

In my own backyard, I have witnessed nandina’s ability to spread outside the area that it was planted. Our backyard backs up against a natural green belt, and I found it growing out there under a tree. Likely from a bird spreading its berries:

Why is it so bad to have nandina in natural areas? It can form dense thickets called “monocultures” that crowd out native plants.

It leads to an overall decrease in biodiversity and fewer native plants. You can see how densely nandina can grow from my own yard. It took over the landscaped area:

Certain states like Texas, Florida and Maryland have designated nandina as an invasive species. However, they are often still sold at nurseries. In Maryland, there are warning labels on the plants!

2. The berries can be toxic to birds and pets

I have to admit, I loved the berries on these shrubs. I would often clip them and add them to flower arrangements, and I loved the burst of color they provided in the middle of the winter. But then I read that the berries contain cyanide and have the potential to kill birds if eaten in large quantities.

Birds will eat the berries when they’ve exhausted other food sources. While there have only been a handful of documented instances of bird deaths from nandina, I didn’t want to take the risk. Especially since my bushes directly surrounded my bird bath!

If you are a pet owner, nandina may not be the best choice for your yard. According to the ASPCA, the plant is toxic to cats and dogs. While it is unlikely they could die from eating the berries, it could make them sick.

Clipping the berries can help

If you have nandina and don’t want to remove it, one thing you can do is clip of the flowers in the summer before they produce berries. Or if you miss the flowering period, clip off the berries!

One of the main criteria I now use when choosing plants for my yard is the benefits they provide for the local ecosystem. This can include nectar and food sources for pollinators and other wildlife. But some of the most important plants ecologically are those that serve as host plants to caterpillars. You can read why this is so important in my Top 6 Benefits of Native Plants.

This non-native does not serve as a host plant

According to Doug Tallamy, author of Nature’s Best Hope, some plants such as oak trees serve as host plants for hundreds of species of insects, however nandina serves as a host species for ZERO species here in the US. Its benefits to insects and other wildlife is very limited, so why not put another plant in its place!

4. There are better native plant options

The good news is that there are other great options to nandina. If you are looking for a similar evergreen plant, try the native yaupon holly. The female plants produce red berries.

You can also try planting the native golden current depending on where you live in the US. I recommend using the Wildflower.org native plant database to find native evergreen shrubs for your area!

Finally, if you have your heart set on nandina, you can find cultivars that are sterile and don’t produce berries or spread by rhizomes.

5. Once you have nandina, it is hard to get rid of it!

I had a landscaper help remove all our nandina shrubs four months ago. He did his best to break up and remove as many of the roots as he could. However I’m still digging up new growth every couple weeks to keep it at bay.

Nandina spreads underground through rhizomes and any fragmented root and sprout a new plant! It takes determination and persistence to get rid of it for good. You can see how it can easily become invasive in natural areas. Here is some popping up in my landscaping:

Want to see my yard after removing the nandina?

Check it out here:

Pin this to help spread the word! 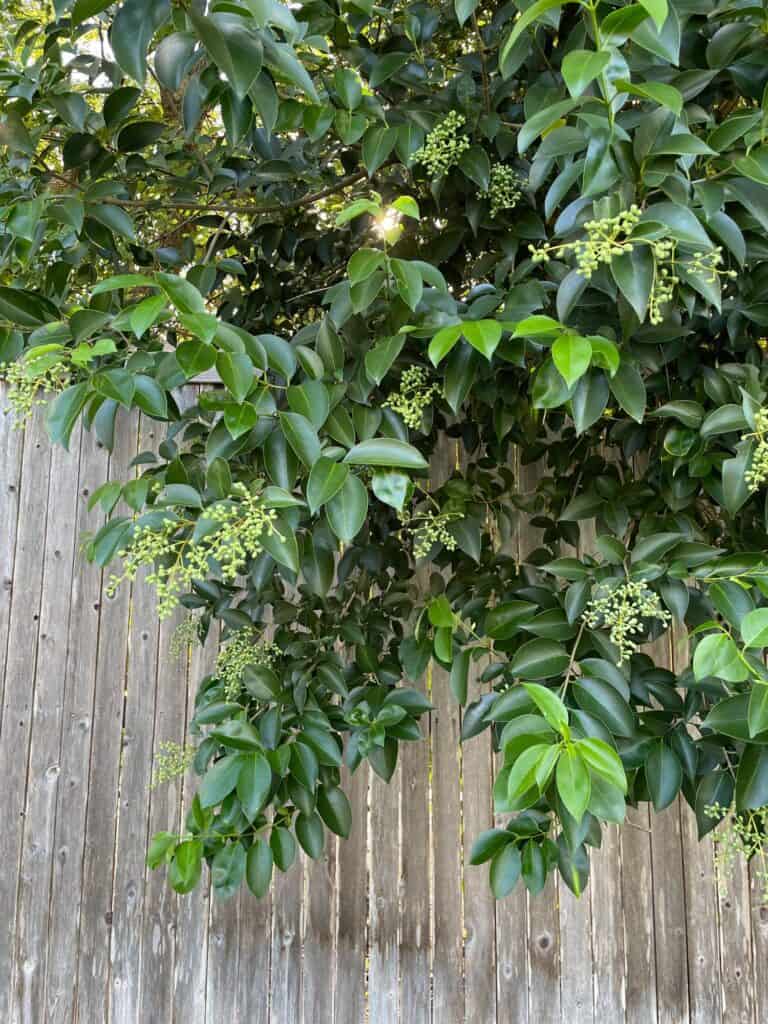 If there is one plant you should avoid at the nursery at all costs, it is Ligustrum (also known as Privet). If you already have it growing in your yard, you may want to seriously consider taking it out.

Why? Because Ligustrum is a highly invasive non-native plant that is taking over wooded areas throughout the Eastern United States, crowding out native species and drastically reducing biodiversity in those areas.